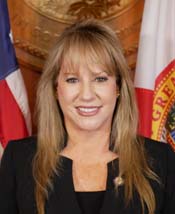 Commissioner Coonrod began her criminal justice career in 1992 when she was appointed as an assistant state attorney for the Second Judicial Circuit. As a prosecutor, Commissioner Coonrod handled a diverse set of criminal cases ranging from misdemeanor traffic offenses to first degree felonies and crimes punishable by life in prison. She was the lead prosecutor in more than 57 jury trials and more than 30 non-jury trials.

During her career with the State Attorney’s Office, Commissioner Coonrod gained extensive criminal law experience, and became well versed in the Florida criminal justice system. She prosecuted perpetrators of crimes, advocated sentencing of those found guilty, and worked closely with victims and various law enforcement agencies. As an assistant state attorney, Commissioner Coonrod was responsible for making charging decisions and determining the appropriate resolution of criminal cases.

Commissioner Coonrod later served as an administrative hearing officer with the Florida Department of Agriculture and Consumer Services Division of Licensing where she directed and supervised the other hearing officers in that division. During her role as hearing officer, Commissioner Coonrod presided over 1,400 informal hearings involving the denial, suspension, and revocation of licensure under Chapters 493 and 790, Florida Statutes. Her experience also includes representing children before the courts as a certified court appointed guardian ad-litem, providing training seminars to law enforcement agencies, and teaching graduate and undergraduate courses as an adjunct instructor at Florida State University College of Criminology and Criminal Justice.

Commissioner Coonrod has been a member of the Florida Bar since 1991, and the United States District Court for the Middle District of Florida since 1992. She earned her Bachelor of Science degree from Florida State University College of Business in 1987, and received her Juris Doctor degree from Nova University in 1991. While in law school, Commissioner Coonrod was a member of the Moot Court Society, Nova Law Review, and was President of Phi Delta Phi legal fraternity. Her professional affiliations include membership in the Association of Paroling Authorities International, Florida Council on Crime and Delinquency, and the Tallahassee Bar Association.

Commissioner Coonrod was initially appointed by the Governor and Cabinet on June 26, 2012, and was unanimously confirmed by the Florida Senate on April 29, 2013. Coonrod was reappointed by the Governor and Florida Cabinet on June 13, 2018, to serve a second six-year term, and was confirmed by the Florida Senate on May 1, 2019. In December of 2020, Commissioner Coonrod was reappointed as Commission Chair for a third consecutive two-year term. Chair Coonrod’s term expires June 30, 2022.